If you are familiar with those LED lights designed to help with the eye strain while you’re working at your PC, know that the Quntis laptop lamp Pro follows pretty much the same concept. But instead of attaching the LED lamp to a separate monitor, this light bar can be used mainly with laptops.

But do you actually need this type of devices with your portable computer? It’s not like the laptops are brighter than Desktop monitors (most are actually dimmer), so, unless you plan to keep your lights on, then you do need a lamp to reduce eye strain. And why not use a device that won’t occupy space from your desk and instead it will directly attach to the laptop monitor?

Sure, you’ll lose a USB port, but at least it won’t occupy a power socket. I have tested the Quntis ScreenLinear Pro some time ago and it was a well built LED light for monitors. It’s true that it has borrowed some elements from BenQ, but then again, the idea is to cover all types of budgets and if Quntis was able to deliver a similar experience at a lower cost, then the end user is going to be happy.

The Quntis Laptop Lamp Pro partially follows the design concept of the ScreenLinear Pro, so we’re still dealing with a light bar, but it’s a bit smaller, measuring 10.83 X 2.36 X 1.77 inches (or 27.5 X 6 X 4.5 cm). It should be enough even for the larger laptops considering that the ScreenLinear Pro was enough for a 25-inch monitor.

But will it work with laptops that use monitors with a thin bezel, like the MacBook Pro for example? I did try it on a 13-inch MacBook and, while it does get attached to the monitor and stays in place (doesn’t cover the camera), it made me feel uneasy. That’s because it pushes on the glass and I have no doubt that at some point, it will damage it. A plastic gaming laptop, such as the Lenovo Y520 wore the Quntis Laptop Lamp Pro much better.

And that’s because the bezels are so much bigger around the screen and there is a lot of plastic which won’t be damaged by the clamp force. Don’t get me wrong, the manufacturer has added some silicone pads where the light bar gets in contact with the laptop, but the clamp is constantly pushing (quite hard, actually), so I am not comfortable putting it on glass.

A large portion of the device is made of metal covered by a black matte finish, but the side panels and the controls section are made of plastic. The latter is glossy black and that’s nice for increasing the aesthetic value of the light bar, but since that’s pretty much the only place where you’re going to put your fingers, it’s going to get lots of fingerprints and smudges.

That being said, the Quntis Laptop Lamp Pro makes use of touch-sensitive buttons and, from the left, there is a Dim button (four modes available – 5, 30, 60 and 100% intensity). It is followed by the Color Temperature button and three are four presets available – 3,000K, 4,000K, 5,000K and 6,500K. In the middle, there is a light sensor that’s not perfectly aligned with the cut-out and the last two buttons. First, there’s the Light Sensor switch and then, there’s the Power On/Off button.

The Light Sensor switch is a bit particular because it uses the aforementioned light sensor to adjust the intensity of the light accordingly. And it also has an LED that lights up to let you know that this mode is currently active. I did like that it wasn’t necessary to readjust the light bar every time I turned it off since the device does remember its state prior to being powered off.

Quntis Laptop Lamp Pro has 27 LEDs mounted on a strip and they’re bright enough, especially when being set up at 6,500K and the angle at which the manufacturer has attached the strip should not bother the eye. That is only if you keep the monitor perfectly perpendicular and most of us do not.

The manufacturer has added an Allen key inside the package and some instructions on how to adjust the angle at which the Quntis Laptop Lamp Pro shines down on your keyboard. The idea is to take out a silicone cover and expose the screw inside. Then, use the key to loosen or tighten the mechanism at the desired angle. It does feel more like a permanent solution and it can work if you’re using a single laptop at a fixed angle, otherwise, you’re not really going to be a fan of this approach.

Quntis says that the light bar should not cause any flaring on the screen and it’s true considering that even if I was pointing the light directly at the screen, I could only see the dust particles that I needed to wipe, but it had no glaring effect. I also decided to check if the light is flickering (which could cause major eye fatigue) and using a Sony camera and an iPhone 12, I saw no flickering. Also, the light was fairly even.

While I didn’t really care if the ScreenLinear Pro was portable, the Quntis Laptop Lamp Pro needs to be easily carried since it connects to a portable device. I suppose it’s not that difficult to move it next to the laptop and there’s a dedicated pouch to protect it from scratches – and, at 4.58 oz, it’s not really going to make your bag heavier. What about the cable?

The cable is almost 3-foot long (90cm) and it is permanently attached to the rear side of the light bar. This is a step down from the removable braided cable of the Quntis ScreenLinear Pro. But, there is some silver lining considering that it has a USB-C connector, as well as a USB-A adapter that can go over the USB-C. 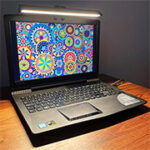